As industry development continues across the country, Indiana bat (Myotis sodalis) and northern long-eared bat (Myotis septentrionalis) habitat conservation is important to maintain their populations. Indiana bats and northern long-eared bats are listed as federally endangered and threatened species, respectively. During the summer, they are both forest dwelling bats that will roost underneath the peeling bark or within cracks, crevices, or cavities of trees. During the winter, both species hibernate in abandoned mines and caves. As a response to increasing Indiana bat and northern long-eared bat conservation measures and bat habitat assessment required by the United States Fish and Wildlife Service (USFWS), AllStar Ecology has designed and manufactured artificial bat roosting structures in the form of two-chambered Rocket Boxes.

In West Virginia, tree clearing for a project that exceeds 17 acres, or is within a USFWS terrestrial buffer for rare, threatened or endangered species, is subject to a Bat Habitat Assessment and Conservation Plan.  This Plan is required to obtain approval for tree clearing. The Plan requires conservation measures such as artificial roosts to be installed in order to replace potential roost trees cleared and taken for construction of the project. Usually, conservation measures can be installed at a project on-site, but if the project is of a great enough scope, off-site bat conservation might be required in the form of permanent off-site land conservation.

Artificial roost placement and off-site land conservation selection involves the use of the AllStar Ecology developed Myotine Suitable  Bat Habitat Assessment Model.  This model ranks areas of potential northern long-eared bat and/or Indiana bat habitat based on landscape features such as forest fragmentation, aspect, solar radiation, slope, proximity to permanent water, and elevation.  Rocket Boxes are then installed in areas of the highest suitability indicated by the model for the greatest chance of bat occupation. Off-site land conservation also uses the model to evaluate large areas quickly for bat habitat conservation potential. Areas of high quality habitat are then targeted for permanent conservation. 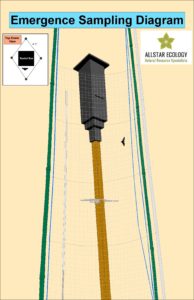 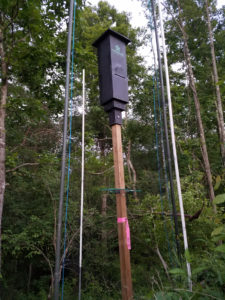 In 2016, AllStar Ecology installed 295 artificial roosts (Rocket Boxes) across West Virginia as part of our clients’ Habitat Assessment and Conservation Plans. Rocket Boxes require monitoring twice during the pupping season for two years after installation as part of Plan requirements.  If bats were found, mist nets were erected around the Rocket Box at dusk that same night to capture bats leaving to forage.  Data was taken on each captured bat such as sex, weight, right forearm length, species, etc.

We develop bat conservation and survey solutions to fulfill the needs of various industries, land managers and the scientific community. AllStar has performed numerous surveys throughout West Virginia, Ohio and Pennsylvania for industries including oil and gas, mining, development and government to meet the needs of our clients. Learn more about our bat services by clicking here or contact us if you are looking for solutions.
TALK WITH US